On Saturday, September 27, 2014, I completed my third half marathon!

The expo was decent. I went at around 3:30 on Friday afternoon. Everything was easy to pick up and the volunteers were very helpful. The t-shirt was a strange design, but a very flattering fit. I bought an additional long sleeved t-shirt from Women's Running because they were giving 20% off everything. (Unfortunately they had it marked wrong and I got an XL). I wish they would have had more at the expo because I enjoy seeing running stuff. They really only had maybe ten vendors there and about half were other races.

Brad and I arrived at the race around 5:45 AM and were able to park in my parking garage before they closed the streets around it. The start was fairly typical. It was a fairly sticky morning so I ditched my sweatshirt early on. The corrals seemed very packed and there was no room to stretch or loosen up.

Once the race got started, it was apparent that the race organizers had identified all the hills in Nashville and figured out how to make us only run the uphills of every single one. (Maybe I'm being a little dramatic, but that's what it felt like). I was seriously debating giving up after 2 miles. I felt dizzy and tired and couldn't breathe. Thankfully I couldn't find anyone to give me a ride back to the start, so I kept going. After GU-ing it up, I felt much better and was able to actually enjoy the second half of the race.

I ended up PR-ing, which was a major surprise! The Country Music Half Marathon that I ran in April was 2:58. The Women's Running Half Marathon was 2:50:12. I'll take it! Still shooting for an ultimate PR of 2:30, but that obviously wasn't meant to happen this time.

The finish area was great! The medal is HUGE and very cute. They offered the standard bananas, bagels, and granola bars at the finish. After the finish chute, they had a whole set up of freebies. They had a "freshen up" tent with face wipes, sunscreen (probably needed that prior to running), and body spray. They had free smoothies from Smoothie King. They offered free massages, but I didn't want to wait that long for one. I was able to exchange my XL shirt that I bought. It was very pleasant!

Overall, glad I did it, but it was a test of me mentally! A test that I passed :)

I'm not good at waiting.


My half marathon is this Saturday! I'm very excited, but also insanely nervous. I'm really not sure why I'm nervous this time around. I have trained hard and I'm ready. I know that I can do it. I don't care too too much about time, just doing better than my last one. I've got all the logistics taken care of. However, I am still dreading it because somehow I don't feel like I am good enough.

I realize that that is not true, and that I can run 13.1 miles. But I am really good at getting inside my own head and leaving doubt there. I know that runners talk about the "taper curse" where you are running less the week before a race and it leaves you time to think WAY too much. I think that is exactly what is going on.

I am super excited for the expo tomorrow and the race on Saturday morning! I am even more excited for Sunday, when I don't even have to think about running. (I may also be slightly burnt out physically and mentally).

Will post a full race recap sometime this weekend and I'm sure that will be much more positive than this post :) Thanks for listening to my whining. 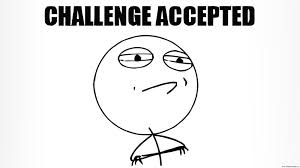 I had to add this too. Hilarious, but scarily accurate:
Google Translate for Runners
Posted by Unknown at 11:01 AM 1 comment:

I kind of overdid it this last weekend. As you all read, I had a wonderful 11 mile run! (I'm still kind of celebrating that). However, I also was on my feet ALL day on Saturday after the run. I did take a good rest day on Sunday (watching football is the best recovery). Then Monday and Tuesday I did lots of strength training and treadmill running.
Then I woke up on Wednesday morning
And my left hamstring refused to work like it was supposed to. Now it doesn't take much for me to "need" to take time off of running. I tend to look for easy excuses. I've decided that this one wasn't just an excuse. So I didn't do my speed workout on Wednesday or my 3 miler on Thursday. It does feel better today so I will attempt my 12 miler tomorrow, but I don't want to sacrifice the half marathon in a week. I will be taking it easy!

An illustration of my injury: 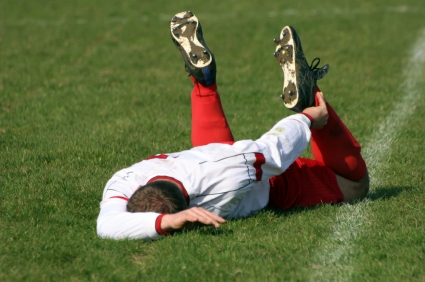 If anyone who actually runs reads this blog (;P) do you foam roll? If so, which foam roller do you use? I've been looking around but they all seem rather expensive and I really don't get sore that often. Would it still be worth it?
Posted by Unknown at 8:34 AM No comments:

I had the BEST run of my life on Saturday! This happened for several reasons:

1. I have learned how to properly fuel (at least mostly). I had Panda Express the night before (orange chicken with lots of brown rice aka protein and lots of carbs). I had three eggs and toast for breakfast before my run. I had a Powerbar Performance Energy Blend (Blueberry Banana) just before I ran. An hour into my run, I had GU Vanilla Bean (which I don't really like, but can handle). After the run, I had a Gatorade and copious amounts of water.

2. I have awesome shoes. As seen here.

3. Weather was beautiful. I even had to wear a sweatshirt to drive to the trail. I have never appreciated fall more.

4. I have trained well and my body was prepared!

So my run was 11 miles. My time was around 2:07, which is perfect for the pace I'm trying to get. I'm not sure that I'm quite on pace to get my ultimate goal of 2:30, but I'm going to get close enough to feel good.

I mentioned before that I have a hard time getting over the mental hurdle of double digit runs. Not sure why, but Saturday's run was just perfect. I don't know what I did differently mentally, but I made it through. I know this will help me both with this Saturday's 12 miler and the next Saturday's half marathon because I know I could have continued on in this run and done the whole 13.1 miles. It's exciting to be able to prove to myself that I'm ready for my next challenge-- 26.2!

PS-maybe Panda Express will sponsor me. I'm pretty sure I'm one of the only runners ever to use them as pre-race fuel. (don't judge me, it worked!)

PPS-if anyone from Panda Express corporate happens to be reading this, I'd accept the sponsorship offer. Thanks in advance.
Posted by Unknown at 1:25 PM No comments:

I figured out why I had been feeling sluggish and unmotivated and defeated while running lately! The solution is so simple and easy that I'm super excited for training now. I have found the magic that every runner should know! This will make me famous! Here's my secret:


Heat is really hard to run in.
Ok, so maybe not an epiphany, but it was a breakthrough! I had been slowing up and getting much more tired than I should have up until yesterday's long run. Yesterday was overcast and cool, even though the humidity was still there. I ran 9 miles in 1:47. I looked back at my last 9 mile run (which was June 22). That was in 1:55. So vast improvement! Also, none of my splits yesterday were over 12:00. I was speedy! Also-I could have kept going which is a great feeling :) Looking forward to running in fall! (Hopefully not falling in running).﻿
Posted by Unknown at 9:20 AM No comments:

Yesterday was one of the hardest runs I have ever attempted. HOWEVER, I went 10 miles! I'm officially in double digits and that is exciting. It was extremely hot and I was the genius that decided to try a new, non-shaded route. The sun sapped any energy I had. My wonderful husband (who gained lots of husband points for this) brought me fuel about an hour into my run. I'm trying to give up my dislike of Gatorade by forcing myself to use it. It is offered at every race and I really do need something more than water on long runs. So it did help, but I probably needed another fuel stop a little ways in because I was miserable for the last three miles. Again, I finished the 10 miles and that is a big mental win for me. It is hard to convince myself that I can run that far, so proving to myself makes it easier.

Now I start a section of training that I have never done before. The plans I have followed in the past have 10 miles as the longest run. The Intermediate plan that I am following has me working up to 12 miles. So still a little ways to go :)

My run was made a little easier by my awesome new running companions: 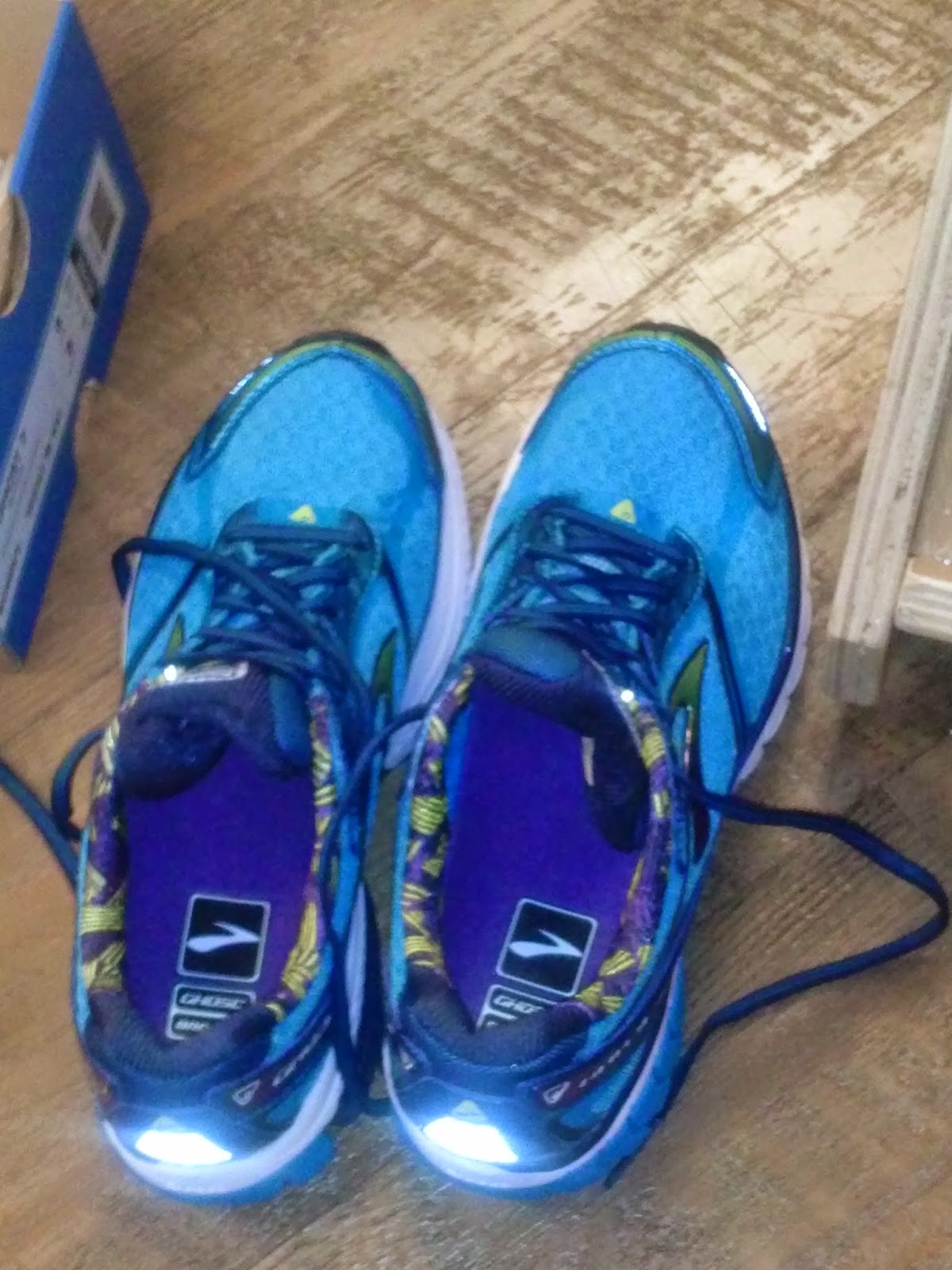 Everyone, say hello to the Brooks Ghost 6! I got fitted for new shoes at a running shop south of Nashville and they were awesome. The girl I worked with got me fitted both for shoes and insoles because apparently I have really flexible arches (I didn't show her my cool party trick where I can bend my foot in half). I really noticed a difference on this run. While it wasn't a great run, my feet felt great and my joints bounced back really quick.

That's all for today folks!
Posted by Unknown at 6:54 AM 2 comments: