There is not much better than family, chocolate, fall, and running! I got to enjoy all three at The Chocolate 5K, put on by NR Road Racing.

I was excited about this race for several reasons:

1. My husband found it and wanted to do it! I love it went he wants to run, so of course I had to do it!

2. My brother was in town for the weekend and I convinced him to do it too! He used to run cross country so at least he knew what he was getting into :)

3. This was my first run race since the half marathon. I've been very stuck in a rut with running and very unmotivated to do it since the half. I knew running another race would get me going again. (especially since I have another 5K next weekend.)

4. It is a very small race, and I have been shying away from those lately.

So the packet pickup was very easy. We just went on the morning of the race and picked it up! There were some pretty decent goodies for a small race. The packet included a t-shirt, Mary Kay samples, travel size deodorant (men's), some Ghirardelli chocolate, and several pamphlets. However, we didn't all get the same stuff in our bags, which was kind of odd.
We waited in the car for the race because it was kind of chilly out, but perfect running weather!
The course ran through a park in the area. It was fairly good, but the sidewalks were a little narrow at the beginning before it thinned out. It probably didn't help that there were three of us and I'm used to just keeping track of myself. There were three total pit stops. Two with more chocolate and one with water. Just about right for a fun 5K.
The finish line was fun. They had people dressed up as the Avengers to bring us through the finish chute. Of course there was more chocolate :)

Overall, a very fun race. We went into it knowing that we would walk when needed because my two racing partners haven't run in at least a few months and I haven't trained in the slightest since the half marathon. I think (cross my fingers, knock on wood) that I am excited to run again. It felt good  and I can do it! Time wasn't stellar, but I honestly didn't care.

Got to run a fun race with two of favorite men. That's enough for me! 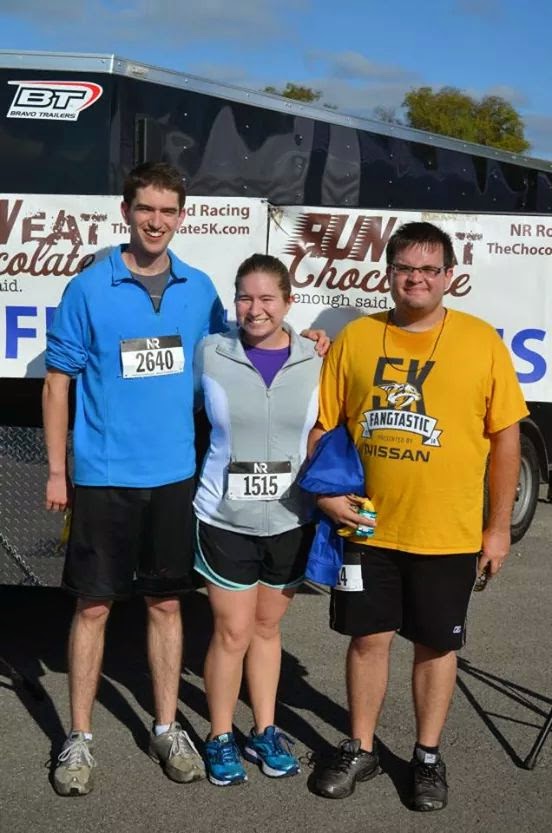