This is a really hard blog post for me to write. I thought that at this moment, I'd be writing to tell you that I ran 26.2 miles and that it was really hard and I'm really sore, but I accomplished my goal. However, that's not how Saturday went. So here's the real story,

I showed up at the start line *mostly* ready. As any runner will tell you, the start line is a nervous and exciting place. However, I was way more nervous than excited. 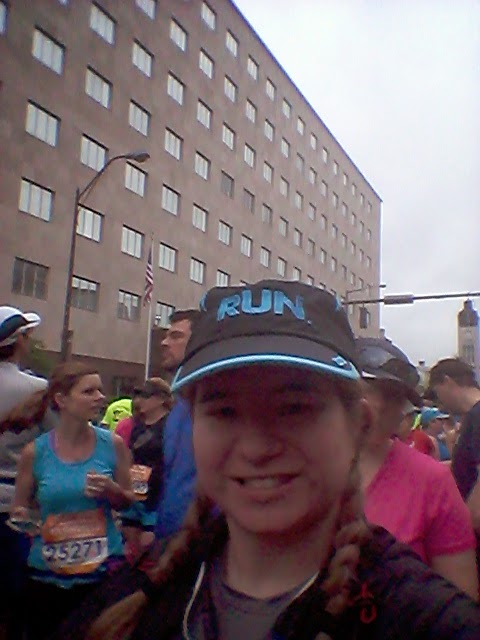 I was also thrown off by the weather. It was supposed to thunderstorm and be awful. It ended up not raining at all, but being equally as awful. I think that was the first majorly humid day that Nashville has had this year (at least that I've run in). I also started out the race in an oversized rain jacket that waay over-heated me.
So anyway, the race started. I was still optimistic, but very nervous. Within the first mile, I knew something was off with my body. I was getting light-headed and dizzy. So I readjusted all my race gear and got rid of the jacket, thinking I was just over heating.
That helped, but not much. At around miles 4 or 5, I started getting reallly dizzy and light headed again. I went over to the curb because I thought I was going to fall over, but ended up throwing up instead. A cop came over and helped me to the medical tent where they took my temp and blood pressure. The nice medical lady said that everything looked ok, but that I needed to keep drinking the loads of water and she made me promise that I would split off from the marathon and only run the half.
That was not as devastating as it should have been because I kind of already knew I couldn't do the full that day. I had trouble breathing and the dizzy/light headed stuff never really went away. I did some kind of run/walk thing that I made up where I ran 2 minutes and walked 2 minutes. My husband run/walked the last three miles with me. I finished the half marathon with my second worst time, but I was just happy to be done.

I'll share some more of my thoughts on this later this week, but I'm honestly ok with it right now. (The snot all over my husband's shirt from me crying afterwards would probably say otherwise). It was not my day. I'm still not entirely sure what went wrong, but I know that if I had tried to push and do the full, I would have regretted it.

So anyway, I'm alive! I'm extremely sore! I'm ready for a break from running! But I hope you'll keep reading because I promise to continue running, even if not 26.2 for a while :)
Posted by Unknown at 6:32 AM