I want to preface this post by saying that yes, I live in the South. Yes, it is much warmer here than most areas of the country. However, I can appreciate the super cold because I grew up in Chicago. That is why I now live in the South. I made the smart choice :)

I have never really been tough enough to even try running outside during the winter until this year. I have found that I don't totally hate it, but here are several random thoughts about it.

1. I like the fact that I don't overheat. The cold weather encourages me to run because, well, it's cold if you don't. 2. I like having to wear a coat because that = more pockets! I don't have to figure out where to put my keys, gels, phone, etc...

3. There are less people on the trails. This is both a like and dislike. I love running alone because I can zone out and not worry about running into anyone. However, I also like having other runners because it is kind of motivating. Not that I get real competitive, but it just feels like a cool club that I'm a part of.

4. I don't like it that I have to work AND run in the winter. That means that I'm sitting inside during all the daylight hours and I have to try to run in the dark. Not a fan of that AT ALL

5. I like that running in the cold makes me feel really tough. 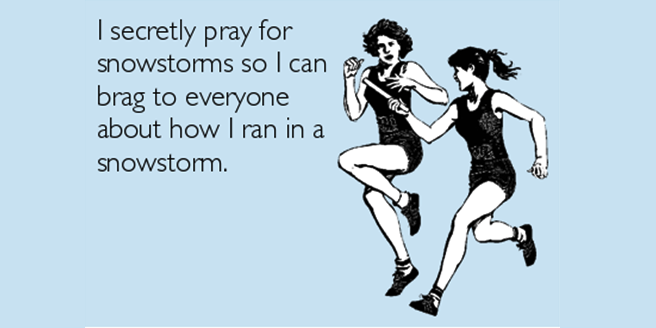 Finally, here's some encouragement to all the runners dealing with cold right now. I read an advertisement (can't remember where): "A strong spring is earned in the winter".

After all my tough winter running stuff, I ran 4 miles on the treadmill after work yesterday. It was cold!
Posted by Unknown at 5:50 AM